I don't think Microsoft expects to sell many Surfaces ...

My next computer may be a Microsoft Surface-class device. But it may not be from Microsoft. 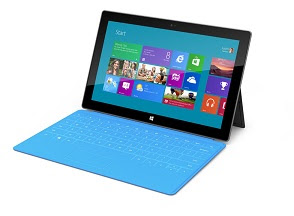 I would like to have one computer that is both easily portable and that has all of the power I need to get things done. Unfortunately, these two goals conflict with one another. A truly portable computer must make tradeoffs that I would rather not have when I sit down in my office.


My anticipation is that the Surface Pro will address this in two ways. First,through all those great ports that it has. With a dedicated video port, I can easily plug it into a larger monitor at the office, or plug it into a projector for presentations on the road. The USB 3.0 port (on the Pro model) offers great expandability: keyboards, extra storage, and even a mouse(?) when I am at home. I also assume this openness to plugins carries over to the OS. I expect to be able to access my files more fluidly than I can on my iPad.

The second issue is in multi-tasking. I recognize that the poor multi-tasking of my iPad is a conscious tradeoff to support longer battery life. However, it means that my current tablet is a compromise that works well when I travel, but is not acceptable when I have access to a traditional computer. I want to be able to easily load multiple tabs in the background when I am near a power source.

I believe that the Surface Pro could have all of the power I need to be my full time computer. I recognize that it won't play the latest games at full resolution. However, I expect its graphics and processor to be strong enough to run email, a web browser with multiple tabs and a productivity program or two.

I am pessimistic on Microsoft's ability to deliver, but I don't think it really matters.

As to the pessimism, the announcement seemed too staged. Usually, I hear more hands-on reports from journalists at these events. Instead, it appears that journalists were allowed hands-on time of 90 seconds shared with an entire group of journalists. This plus the lack of details in some main areas leads me to believe that the Surface is very rough around the edges. Pair the brand new hardware with a brand new operating system and I am really doubtful that Microsoft will deliver by year-end. But delivery may not be Microsoft's goal.

I am trying to figure out the purpose of the announcement. Clearly, the unit isn't ready, so why announce it now? There doesn't appear to be any trade show or major competitive announcement that forced Microsoft's hand. The announcement didn't appear to have enough lead time to get the hype machines fully rolling. And let's not forget that this product could have a chilling effect on Microsoft's partnership plans with other hardware vendors.

My speculation is that the Surface is more of a stake in the ground than anything. I don't see anything proprietary in the product, other than Windows 8, which can be easily licensed. I don't think this was a consumer announcement, but a signal to Microsoft's partners. It is actually a reference design that has some enforcement teeth. The statement to the partners: if you want to come to the party, you must have at least these features and this price point. Because of this, I don't think the price point will be aggressively low. Microsoft doesn't want to price its partners out of the market, but it does want to establish a ceiling on tablet prices and a floor for tablet features.
Posted by emellaich at 12:26 PM